The word “Ikebana” is a concatenation of the Japanese word ikeru (生ける meaning “living; keep alive; arrange flowers”) and hana (花 meaning “flower”), and is translated as “arranging flowers” or “giving life to flowers”.

As a discipline, Ikebana (生け花, “living flowers”) is the Japanese art of flower arrangement, also known as kadō (華道, the “way of flowers”).

The statement of simplicity achieved in the often austere and highly stylized floral arrangement originating from the Japanese tradition of formalised floral display called Ikebana warrants not just close scrutiny and admiration but also provides rich potential for flower arrangement using orchids and containers. As a paradigm for floral design, and as a template to produce ephemeral art, Ikebana promotes the unity, appreciation and contemplation of Nature and humanity through the discipline of art.

Transcending the usual notion and practice of creating a balanced, attractive and colourful layout of blooms, Ikebana often encompasses and emphasizes other aspects of a botanical specimen to include its stems, trunks, leaves and fruits, drawing viewers’ attention towards shape, line and form as a result of the artist’s judicious material selections and placements guided by one or more design philosophies and art principles. Regardless of the level or product of intuitions and instincts of both the artist and the viewers, the following excerpt summarises the basic principle and spiritual aspects of Ikebana very well:

Though ikebana is a creative expression, it has certain rules governing its form. The artist’s intention behind each arrangement is shown through a piece’s color combinations, natural shapes, graceful lines, and the usually implied meaning of the arrangement.

Another aspect present in ikebana is its employment of minimalism. That is, an arrangement may consist of only a minimal number of blooms interspersed among stalks and leaves. The structure of a Japanese flower arrangement is based on a scalene triangle delineated by three main points, usually twigs, considered in some schools to symbolize heaven, earth, and man and in others sun, moon, and earth. The container is a key element of the composition, and various styles of pottery may be used in their construction.

The spiritual aspect of ikebana is considered very important to its practitioners. Silence is a must during practices of ikebana. It is a time to appreciate things in nature that people often overlook because of their busy lives. One becomes more patient and tolerant of differences, not only in nature, but also in general. Ikebana can inspire one to identify with beauty in all art forms. This is also the time when one feels closeness to nature which provides relaxation for the mind, body, and soul.

One can bring style, colour, scent, texture and drama to a room with Ikebana, by taking a detailed study of the discipline, an art form capable of bringing living things from the outside into indoor spaces, for imparting certain mood, charm, whimsy and personality, to accentuate existing design, display and decor, to transform an environment into a visual narrative with organic compositions, thus uniting flora, the embodiment of beauty and elegance, with art, the quintessence of inspiration and creativity. As apparent as the evolved aesthetic sensibility cultivated in, and extolled by, Ikebana, a fuller understanding of the Japanese art of flower arrangement can only be attained from examining the historical and cultural contexts, tracing back about 500 years to Ikenobō, the oldest and largest school of Ikebana, founded in the 15th century by the Buddhist monk, Ikenobō Senno. However, displaying cut flowers in the contexts of Buddhism began nearly a thousand year earlier still via the introduction of Buddhism to Japan from Korea (in about the year 538) and the China (from the 6th and 7th centuries on), when the custom of placing flowers on the altar began. Ikebana emerged from a refined form of indoor beautification resulting from the fusing of the formal offertory flowers in temple and the aristocratic taste for floral decoration.

When Buddhism spread among the ordinary Japanese citizens in the 13th and 14th centuries, an architectural style gradually became common in the late Muromachi period between 14th and 16th centuries:

History
In the shoin style architecture of this period, it was called oshiita (押板）and basically was a wall space where scrolls would be hung and a raised dais in front of this would be for setting an incense burner, vase for flowers, and candle holder.

Closely related to this architectural style is the refined space of tokonoma (床の間) or toko. It is suited, both in style and sensibility, to the elegant display of Ikebana, not bonsai, even though the latter is also steeped in tradition and formality. According to the definition in Wikipedia, it is

a Japanese term generally referring to a built-in recessed space in a Japanese style reception room, in which items for artistic appreciation are displayed. In English, tokonoma is usually called alcove. The items usually displayed in a tokonoma are calligraphic or pictorial scrolls and an arrangement of flowers. Bonsai and okimono are also sometimes displayed there, although traditionally, bonsai were considered to be too dirty for such a highly respected place. The tokonoma and its contents are essential elements of traditional Japanese interior decoration. The word ‘toko’ literally means “floor” or “bed”; ‘ma’ means “space” or “room”.

Also around the time of the establishment of the Ikenobō school, the secular world of Japan in the early 15th century also underwent a gradual transformation from an earlier attitude of passive appreciation to a more deeply considered approach, which forms the basis of what is known as Ikebana today, and which has imparted wider meanings and connotations to placing cut flowers in a vase, a practice that has been shaped by the expression of minimalism, the experiential concept of negative space, and the contemplative essence of Zen philosophy. An understanding of the influences from Japanese traditionon on minimalist architecture and space can be facilitated by the following excerpt:

The Japanese aesthetic principle of Ma (間) refers to empty or open space. That removes all the unnecessary internal walls and opens up the space between interior and the exterior. Frank Lloyd Wright was influenced by the design element of Japanese sliding door that allows to bring the exterior to the interior. The emptiness of spatial arrangement is another idea that reduces everything down to the most essential quality.

The Japanese aesthetic of Wabi-sabi values the quality of simple and plain objects. It appreciates the absence of unnecessary features to view life in quietness and reveals the most innate character of materials. For example, the Japanese flora art, also known as Ikebana has the meaning of let flower express itself. People cut off the branches, leaves and blossoms from the plants and only retain the essential part from the plant. This conveys the idea of essential quality and innate character in nature.

Ma is manifest in Japanese living architecture, garden design and flower arrangement (Ikebana). However, far from being just a spatial concept, Ma is ever-present in all aspects of Japanese daily life, as it applies to time as well as to daily tasks.

Ma (間) is a Japanese word which can be roughly translated as “gap” “space” “pause” or “the space between two structural parts.” The spatial concept is experienced progressively through intervals of spatial designation. In Japanese, ma, the word for space, suggests interval. It is best described as a consciousness of place, not in the sense of an enclosed three-dimensional entity, but rather the simultaneous awareness of form and non-form deriving from an intensification of vision.

Ma is not something that is created by compositional elements; it is the thing that takes place in the imagination of the human who experiences these elements. Therefore ma can be defined as experiential place understood with emphasis on interval.

Whilst Nature is widely perceived by people across many cultures to be the wellspring of human imagination and the stimulus of human creativity, flowers are believed to be the quintessential representation of the primal beauty and fercundity of Nature. The relationship between flowers and humans can be developed and deepened through the act of cultivating, picking, arranging and displaying blooms. Ikebana comes into being and finds its values in the beauty and meaning that humans perceive and derive from flowers. As an art form, Ikebana provides aesthetic guidelines and stylistic frameworks to its practitioners or adherents via a cogent consideration of style, balance, contrast, dominance, subordination, proportion, direction, position, elevation, orientation, repetition, motif, variation, variety, rhythm, scale, and quality of flowers. As a hobby or pastime, Ikebana is a suitable activity and meaningful medium that can provide creative challenges or induce mental relaxations, and to decorate or accentuate an environment with living splendours and floriated fineries.

More than simply putting flowers in a container, ikebana is a disciplined art form in which nature and humanity are brought together. Contrary to the idea of floral arrangement as a collection of particolored or multicolored arrangement of blooms, ikebana often emphasizes other areas of the plant, such as its stems and leaves, and draws emphasis toward shape, line, form. Though ikebana is a creative expression, it has certain rules governing its form. The artist’s intention behind each arrangement is shown through a piece’s color combinations, natural shapes, graceful lines, and the usually implied meaning of the arrangement.

Another aspect present in ikebana is its employment of minimalism. That is, an arrangement may consist of only a minimal number of blooms interspersed among stalks and leaves. The structure of a Japanese flower arrangement is based on a scalene triangle delineated by three main points, usually twigs, considered in some schools to symbolize heaven, earth, and man and in others sun, moon, and earth. The container is a key element of the composition, and various styles of pottery may be used in their construction.

Excellent or exceptional photos and videos uploaded to the group may be featured in the following Gallery of this post to provide exemplary visual documentations of Orchid Ikebana. 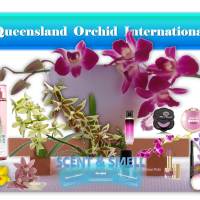 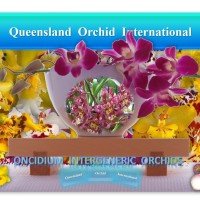 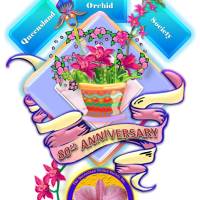 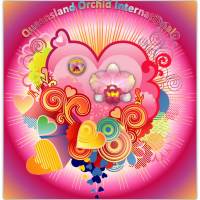 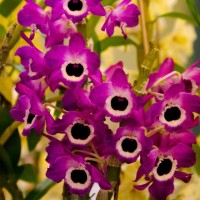 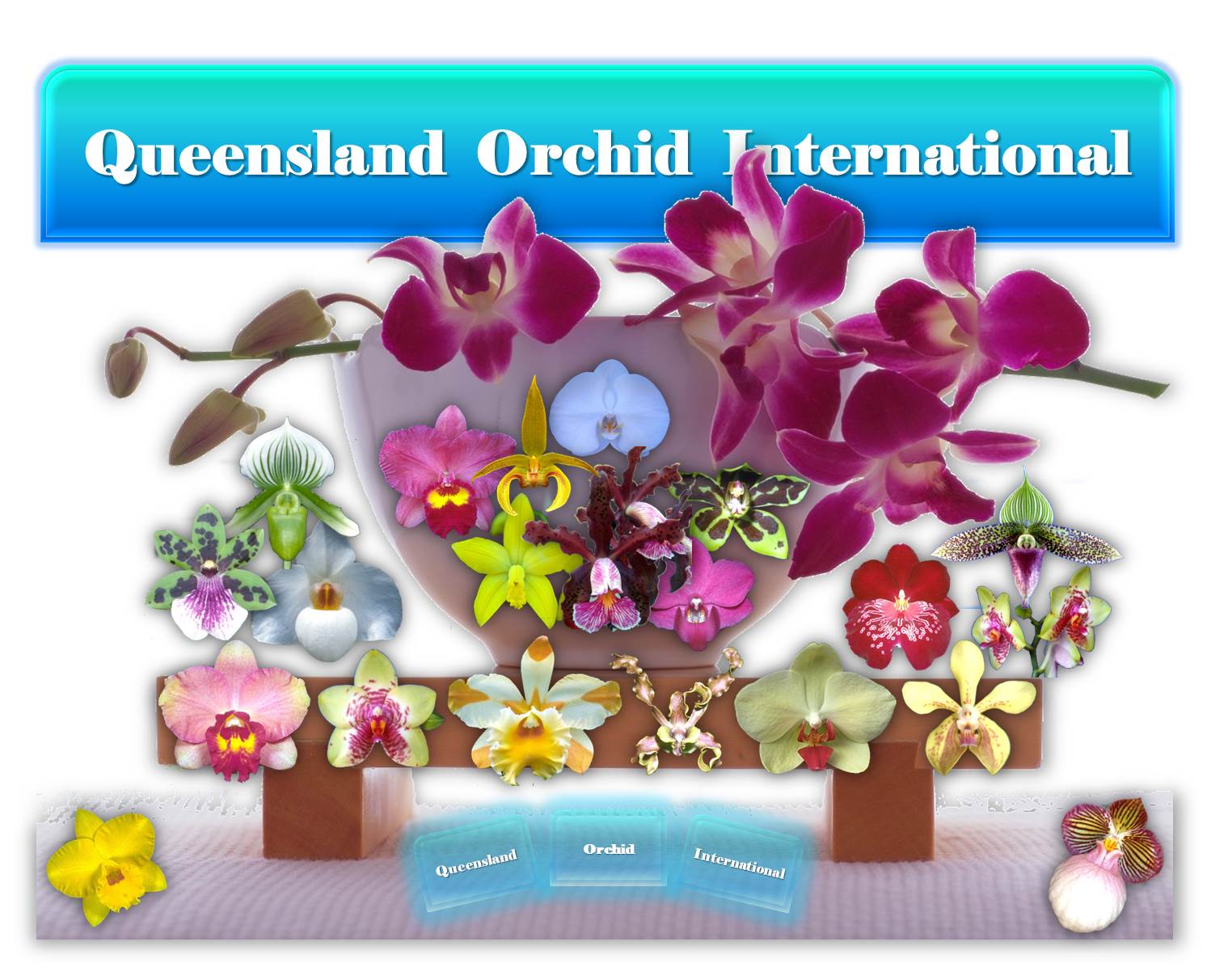