At least 4 weeks to go. Then it might bloom. Cheers Charlie Robino

With great pleasure, SoundEagle would like to introduce at ✿❀ Queensland Orchid International ❀✿ a very special person who likes fishing at sea and cultivating orchids at home in equal measure. A self-taught, avid grower of orchids, Charlie Robino has been recuperating from a recently invented and complex surgery performed in April 2016 on his right ankle, which has been immobilized and protected in a moon boot to aid in its recovery. This surgery aims to remedy a medical misadventure and to rectify the problems caused by Charlie’s foot injury sustained 20 years ago, so that he will eventually have a better quality of life upon full recovery. Despite the circumstance, the temporary disablement, the prescribed physiotherapy and the many disruptions to his normal routines, he still manages to share with friends photos of his impressive collection of orchids grown under semi-open shade house built by his own hands. As can be seen, both Charlie and his orchids are very much in their element in the wide open space of Far North Queensland countryside, which is blessed with warm and humid weather all year round occasioned by tropical downpours, and which is visited by a severe storm or cyclone once every few years. In sickness or health, and notwithstanding the recurrent threat of destructive natural forces and the drenching power of monsoons in the Wet Tropics of Queensland, Charlie has continued to provide a veritable and decent sanctuary for many orchids over the years. To hedge against the complete loss of an orchid species to the wrath of foul weather, Charlie usually keeps three lots of that species as an insurance policy.

About 60% of Charlie’s orchids are inherited from his late father, Carlo Robino, whose orchids are almost always scented. It is very admirable that Charlie has preserved those wonderful orchids and grow them on with gusto despite having other commitments and major interests, which include fishing, hunting, digging, gardening, travelling, painting, music, movies, and being a handyman in general, plus accommodating some endemic ground-dwelling, well-camouflaged birds named curlews, as photographed above and also further explained in the Gallery on Page 2 of this post. Jane Robino, his other significant half, has been looking after the plants during the recovery from his ankle surgery. In the process, she has been progressing much further in her interest and knowledge towards orchids.

The rest of Charlie’s orchids have been acquired from nurseries over the years. There are also about 25 orchids purchased from Mr Don Mapleton, who intended to reduce the size of his orchid collection after being a grower and judge for many years, and who sold Charlie those plants on a friend’s recommendation. The roughly two dozen orchids were acquired over two separate occasions: the first batch was selected by Don, whereas the second was the result of Charlie’s choice.

Whatever the origins of those orchids, Charlie’s keenness, or rather, closeness, towards his orchids, is evident not only in how well he grows his orchids, but also in how he relates to their blossoms anthropomorphically, given that he frequently describes them with a touch of wit and glee as (the embodiments of) ladies and damsels. Those orchids belonging to the Cattleya alliance are generally the most frequent and favourite subjects of his imagination. Moreover, his most beloved orchids are two unnamed Cattleyas inherited from his late father, which he affectionately named as Cattleya Carlo Red and Cattleya Hoss Pink after his father’s first name and nickname respectively. The flower of the former is about 15cm and the latter about 14.5cm in diameter. Both are fragrant, especially the former.

Hence, it is not surprising that orchids in the Cattleya alliance are Charlie’s favourite orchids, not to mention that they can flower profusely nearly all of the year, slowing down only in July and August during winter, when the average day-time temperatures are in the mid 20s and the average night-time temperatures in the high 10s (Celsius). Numbering around 250, they constitute about half of Charlie’s 500 orchids. Unlike their counterparts cultivated in the cooler, dryer, southern parts of Australia, Charlie’s orchids belonging to the Cattleya alliance are grown in deeper pots with a depth of 25cm to 30cm, and up to 40cm for specimens. The roots of those orchids penetrate the entire depths of their pots to seek moisture and to avoid the surface heat caused by hot sun or high ambient temperature.

Disease control, fertilizing and watering are simultaneous: every ten days, Charlie adds fungicide such as Mancozeb or white oil to his 40 litre of balanced fertilizer solution. He then spends about half an hour on spraying those orchids in the Cattleya alliance, given that the high rainfall and humidity of Far North Queensland can easily cause fungal diseases, and also that there are a lot more insect pests at Bramston Beach than there are in Brisbane. Non-flowering orchids are grown under shadecloth to protect them from direct sunlight, whereas flowering ones, especially those in the Cattleya alliance, are moved to an area affording complete protection from the impact of wet weather so that the flowers remain fresh and undamaged by rainstorms.

According to Charlie, the peak flowering of his Oncidiums (including the intergenerics), Cattleyas and Phalaenopsis orchids happens in springtime. Fewest orchids are in flower during summer, when the heat is most intense. His larger Cattleyas tend to start flowering in autumn, whereas his miniature Cattleyas tend to flower anytime of the year.

Charlie considers that the best time to repot his orchids is between February and May, when the worst of summer heat is subsiding and there is plenty of rainfall to sustain the newly repotted plants.

Charlie’s favourite growing medium for potted orchids is scoria (also called quincan or cinder), which is a porous, densely vesicular, dark volcanic rock that is basaltic or andesitic in composition. Given its high surface area and strength with respect to its light weight, and its availability in eye-catching colours, scoria is frequently used in landscaping and drainage works, and is excellent for growing orchids and bromeliads in the tropics. Charlie pots all of his Cattleyas, Oncidiums, Cymbidiums and Phalaenopsis orchids in scoria, except his Dendrobiums, which are potted in a mixture of tree fern, charcoal and pine bark placed on a bottom layer of quincan. According to Charlie’s own comment:

The big wet has started again in F.N.Q. This happens every year sometime between December and March.… For the Orchid enthusiasts, it can be a troubling time. Especially if you are growing in shade houses open to the elements. Rot from excess rain, spot, fungus. Insects plague the grower. However the worst being rot. This situation can be mostly over come by potting in a medium of gravel called Quincan. This is a semi porous gravel witch allows the rain to drain through the root system and thus keep them well drained.

To propagate or divide a potted orchid belonging to the Cattleya alliance, Charlie splits the plant into two halves by cutting its creeping rhizomes in such a way that one half of the plant contains mostly young leading rhizomes, and the other half mostly old rhizomes. The whole plant is left to grow on in the same pot as usual until the old half has produced at least one or a few leading growths. The new half is then removed and repotted with fresh mix in a new pot; whereas the rhizomes of the old half is sprayed with diluted vinegar, and the pot space previously containing the new half is filled with fresh mix over which the new lead(s) of the old half will continue to grow in the same pot.

The other half of Charlie’s 500 orchids comprises mostly Oncidiums, Vandas, Cymbidiums, Dendrobiums and Phalaenopsis orchids as well as other orchid genera, some of which can be seen here and other pages of this multipage post. Whilst many native and species orchids have been mounted on tree trunks and branches in the landscape, hybrids are grown in pots with heavy media to provide stability against the toppling forces of strong winds during storms, and to allow them to be moved into cyclone-proofed shelters if necessary.

So far, Charlie has not had the opportunity nor the desire to procure plants at crowded shows and meetings held by orchid societies, many if not all of which are far away from where he lives, as Far North Queensland is a sizeable area whose remote communities face the tyranny of distance. Whilst Charlie used to visit Innisfail to purchase orchids on the Market Day and at the Feast of the Senses festival, the latter being North Queensland’s premier Tropical Food Experience, nowadays, he buys much less and prefers to exchange orchids with some of his closest friends, with whom he also enjoys his other major interests and pastimes, which come in pairs, as listed here in the order of fondness: orchid and fishing, hunting and digging (rocks, crystals and mineral specimens), as well as travelling and gardening (predominantly in summer). In his spare time, Charlie is a competent painter (of the canvases of his collection as his artistic heart desires, and also of the walls of his house as his handyman mind requires) as well as a connoisseur of fine music and movies.

Far North Queensland, or Tropical North Queensland, is the northernmost part of the state of Queensland, Australia. Centered on the city of Cairns, the region stretches north to the Torres Strait, and west to the Gulf Country. The region has Australia’s only international border, with the independent nation of Papua New Guinea.

The region is home to three World Heritage Sites, the Great Barrier Reef, the Wet Tropics of Queensland and Riversleigh Australia’s largest fossil mammal site. Far North Queensland lays claim to over 70 national parks, including Mount Bartle Frere with a peak of 1,622 metres (5,322 ft) it is the highest peak in both Northern Australia and Queensland.

The Far North region is the only region of Australia that is home to the two oldest continuous cultures on the planet, the Aboriginal Australians and the Torres Strait Islanders.

Far North Queensland is highlighted in green on the map of Queensland.

Queensland is the only state in Australia whose floral emblem is an orchid. Refer to the article entitled Cooktown Orchid (Dendrobium bigibbum, Dendrobium phalaenopsis, Vappodes phalaenopsis): Floral Emblem of Queensland, Australia to learn more.

Specifically, Charlie Robino lives at Bramston Beach, Queensland, a town located about 1,620km (1,007mi) northwest of Brisbane, 66km (41mi) south of the regional centre of Cairns, and about 20km (12mi) east of the Bruce Highway. At the 2006 census, the town had a population of less than 200. 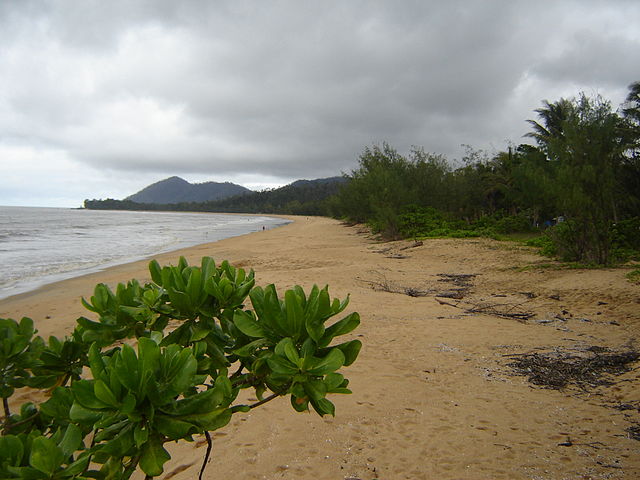 Charlie Robino’s fondness for those roadrunner-lookalike ground-dwelling Australian birds named curlews and his collection containing a number of orchids endemic to Queensland can be seen in the Gallery on Page 2 of this post.